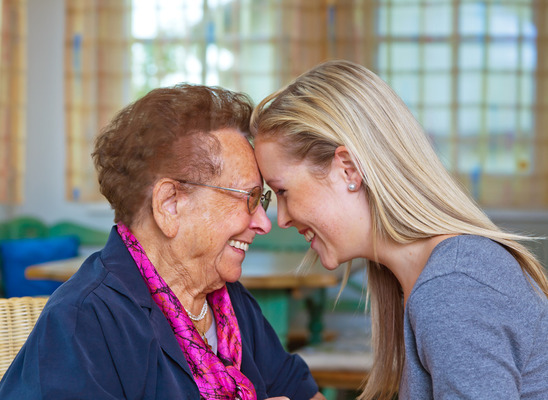 God has such a sense of humor, doesn’t He? As young adults, we think we have our lives all planned out, and then He sends us down paths that we had never intended to explore. One of those paths for our family has been caring for adult relatives.

Over the years we have provided short-term or long-term care in our home for five different adults. I find this amazing because both my husband and I are very private people and we did not inherit the hospitality gene. Hmmm . . . this gives credence to the verse about God working best through weak people.

I am not a natural-born mother or caregiver. I am kind-hearted, but putting the needs of someone else before my own is a day-to-day grace of the Lord. If, as they say, God sends us children to grow us up, He must have sent me elderly relatives because raising our five sons didn’t quite finish the job.

Our first caregiving experience was with my father-in-law. He lived for a few months in our basement apartment, but we provided all of his meals, companionship, and laundry service. Things were lively because at the time we had a toddler in the house and I was expecting Son #2. Dad didn’t require personal care, but it was God’s gentle way of introducing us to short-term eldercare.

Fast forward several years to our next caregiving experience. We now had a houseful of teenagers. My husband’s favorite aunt had lost the vision in one eye a couple of years before, but the ophthalmologist recommended against surgery since she had heart issues and diabetes and could still see with her remaining eye. But when she had angioplasty to remove plaque from the arteries around her heart, a tiny piece of the plaque was released into her bloodstream and settled in the back of her good eye, destroying her vision.

Auntie was able-bodied but could not live alone, so we invited her to live with us. Since this was a very sudden event, we scrambled to prepare for her needs. Our boys doubled up to give her the only main floor bedroom besides our own.

I learned to fill her insulin syringes and prepare foods appropriate for her diabetic diet. Since she couldn’t serve herself from the serving dishes, I learned to arrange her food on her plate so that the entrée and side dishes were always in the same locations. I would tell her that her meat was at 4 o’clock on her plate, for example.

I learned to offer her an arm when moving around the house; she preferred, as most people do, to hold onto me rather than for me to hold onto her. I was thankful that we no longer had toddlers in the house—their toys would have been tripping hazards for Auntie in her blindness. We hired a home health aide to assist her with bathing.

Her only complaint was that it was so depressing because all she could see when she looked around was the color gray. We contacted her ophthalmologist who agreed to try surgery on her first-blind eye. It was a long-shot, but worth it since she now was totally blind.

I will never forget the early-December morning when we took her in to have the bandages removed. When the surgeon removed them, she exclaimed, “I can see! I can see! Oh—this is the best Christmas present I’ve ever gotten!” Even now, I get teary-eyed as I remember her joy and the surgeon’s satisfaction.

Auntie was able to return to independent living in her home for the rest of her life—exactly what she desired—although her many friends and relatives did the driving. And we returned to life as usual in our busy home, too.

For several years, our home was filled with ever-growing sons. When the last one left for college, Hubby and I looked forward to a return to our privacy, the first since we had become parents twenty-seven years earlier. We relished the freedom we would have to just pick up and go on a whim.

But God had a different idea. My mother had been a widow for eleven years and had enjoyed living in her own home ninety miles distant. She was active in church activities and still teaching piano at the ripe young age of 86!

But we had noticed that she was increasingly dependent on our daily phone conversations and uneasy about making decisions regarding the upkeep of her home and yard. It was not a surprise when she confided, “I don’t think I should be living alone anymore” after she spent a few days with us recuperating from back surgery.

Mother’s cheerful attitude made her a pleasure to have in our home. She made the necessary decisions to sell her home and stop driving, making our job so much easier. She participated in the sorting process and was delighted that so many of her possessions found homes with her seven grandchildren. They were all in their twenties and just starting to furnish their homes.

Mother had battled a rare blood disorder called Waldenstrom’s macroglobulinemia for many years. Finally the medications were no longer beneficial and her energy levels sank to a new low. After dressing, she had to rest before eating breakfast. After breakfast, she required another rest. And so went the day. She enjoyed going to church and out to eat, but the exertion was exhausting so we found ourselves staying home more.

She once told me that she loved to look at the cross hanging in her new room. She said it reminded her to pray, “Lord, keep me straight.” Her comment surprised me—I couldn’t imagine that my godly mother ever struggled spiritually. Indeed, I got to know her on a different level as she became more dependent. Now relieved from making the daily decisions of running a household, she relaxed and enjoyed her days, working on photo albums and praying for those on her prayer list.

And more than once, she said, “I am happy to keep living as long as the Lord wants me to, but when He calls me home, don’t you set up any roadblocks.” Knowing her wishes made decisions during her final hospitalization easier.

After Mother’s graduation to heaven, we settled into life as just a couple for three years. Then the Lord suddenly brought an acquaintance into our home. I had known her casually a few years earlier, but was surprised when she called a few days before Christmas to ask for a place to stay. It was bitter cold outside and she had exhausted all of her allotment of nights at the local shelter. This was our introduction to the world of the homeless, an essay for another day.

We discovered that hosting a non-relative put a new twist on hospitality. Although she had a college degree and had held a responsible job in the past, we learned that she had only borderline normal intelligence. In addition, she had been raised in a severely dysfunctional home. We did what we could for her, but five months later we had to give her a deadline to move out. She had grown too comfortable with us and we discovered that she was much too particular about what job she would accept. We parted on good terms, and I am pleased to report that she found a job in a deli which she has now held for almost four years.

About six months after my friend’s departure, we learned that my mother-in-law had been diagnosed with Alzheimer Disease. My husband and I had agreed early in our marriage that we would care for any of our parents if they were in need, so we took a deep breath and made the preparations.

My brother-in-law and his wife made almost daily fifty-mile roundtrips to check on Mom. They did routine maintenance around her house and took her groceries and drove her to appointments. They also had the foresight to get her to sign him up on her checking account—this after she forgot to pay her health insurance premium and other important bills.

Meanwhile, my husband gutted our office/guestroom and installed insulation so she would be warm enough in our old farmhouse. We knew this could be a long-term commitment and we didn’t want to disrupt her to fix up her room after she had settled in. We moved my office to a small desk in the master bathroom. I have since written eight books from my little bathroom office.

We moved Mom in with us in November 2012. Unlike our other houseguests, she did not want to come. Due to her dementia, she could not understand why she couldn’t live in her own home and handle her own money.

But there was no question that we had made the right decision. During the months before she moved into our home, she had shrunk from a Size 16 to a Size 6—she simply forgot to eat. We learned that many people with dementia no longer experience hunger or thirst.

Mom continues to live with us now. It has been a trying time for her and for us, but also one filled with much joy. I have had the opportunity to know her better through living together. She and I had both been so busy with our separate lives that we had only really spent time together at holidays. Now I can hear her stories and learn what made her the woman she grew to be. I will be writing more about our adventures in living in an Alzheimer world in future articles.

Our present caregiving ministry is by far the most challenging we have done. It is difficult to see someone you love losing a bit of herself and her abilities each day. It is difficult to not take her comments personally when she is angry, but to realize that it is the disease talking. We have learned to turn to the Lord and to each other for support as we walk through these days with my mother-in-law.

I am thankful that God so graciously prepared us for these days through our earlier short-term caregiving opportunities. He certainly chose the least-likely person for the job—me—but He has been faithful to provide for all of my needs as I walk down the path He has chosen for me.