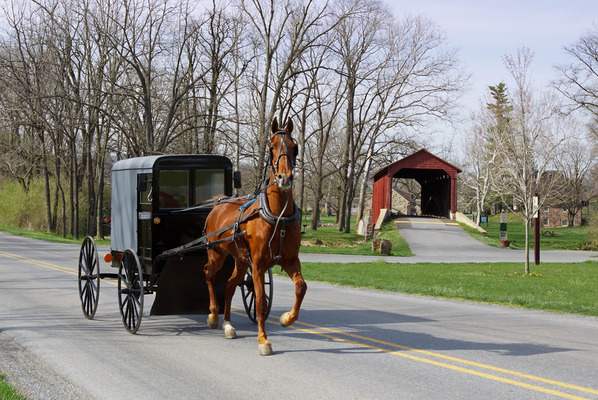 Every few years we visit relatives who live in “Amish country” Pennsylvania. What a beautiful area! In addition to the rolling green hills, clean farms, and peaceful setting of simple life, I have always been impressed with the integrity of these communities. Amish families leave fresh vegetables, fruit, canned goods, and even crafts unattended along the side of the road, faithful that customers will leave the right amount of money behind in the little wicker basket. And my great uncle says, they almost always do!

Probably the most intriguing aspect of Amish life is how they work together to care for their sick, needy, and elderly. Without Social Security checks, Medicare, and Medicaid, the Amish have a different system of eldercare than 99.9% of America: the family, community, and church. After a few conversations with some “locals” in the area, the plan became pretty clear: children know one day they’ll be responsible to care for their parents. When parents grow old, the farm is given to the children, and thus the provision and inheritance along with the caregiving begins. In most cases an “elder home” is built somewhere near the main house on the family property, where the aging parents can reside until they are too frail and often move in with the family in the main house. Sometimes others from their “church community” help out and come alongside caregiving families who may need to devote extra time to elderly parents. Elderly without parents are often taken in by relatives, or by another family.

And while we may not see eye-to-eye with the Amish on many doctrinal points, there is certainly a clear responsibility of 1 Timothy 5 upheld here. In our 21st century solution of institutionalized eldercare, massive insurance outlays, and sustainable government provisioning, it’s time to consider a different model.

Tom Utley wrote of this perspective in the The Daily Telegraph, on March 31st 2006:

“There is, as we all know, a very much better way of looking after the elderly than simply shoveling money in the direction of strangers, in the hope that they will look after them.

I am thinking of the most effective social security system ever devised by man or nature. It is a system that still operates in most primate societies, but one which is on the verge of collapse in model Britain. I mean, of course, the family.

In almost every way, I would much rather live here [Britain] than in a mid-hut village in Africa.

But I reckon that the very old in the Third World, looked after by their families in communities bustling with life, have a much better time of it than a great many British OAPs, sitting around in care homes stinking of urine, watching afternoon television and counting the days or weeks until that rare visit from their young.”

Mr. Utley is right, it’s time to recover the honor due our elderly and restore care to the family and church, where it belongs. Let us stand as Christians to honor and care for our parents, love the elderly among us, serve the widow, and strive to make eldercare a relationship-centered reality.

Next time you get to drive by an old Amish farm and consider their primitive lifestyle, remember there’s probably a 90 year old man in that house being served a home-cooked meal with a lively 5-year grandson on his lap…everyday.

“But if any widow has children or grandchildren, let them first learn to show piety at home and to repay their parents; for this is good and acceptable before God…but if anyone does not provide for his own, and especially for those of his household, he has denied the faith and is worse than an unbeliever.” 1 Tim 5:4, 8